I have been reading “Korpus Mapur dalam Islamisasi Bangka”, a book by Teungku Sayyid Deqy, an ordinary man from Belinyu, North Bangka that working as a staff of clinical center company in Pangkal pinang. His great works resulted in more 580 pages, full of raw information about myth, legend, oral stories, pictures, writen information or a lot of transcripts about early Islamization in Bangka.

I adore this man, his research inspired us not only about early research in Bangka but also his greatest motivation to write history, which less people would do it. Commonly, this kind of research wasted a lot of money, plus this long research took long time and physic endurance. His eight years research inspired us that great works need more consistency and comittment than as most people did as ussual.


In addition, in history study, this book becomes a rare source of data within the study of Bangka history. Before this book, I was already familiar with two other book about history, “Sejarah Pertambangan Timah Bangka Belitung” by Erwiza Erman and “Legenda dalam Sejarah Bangka” by Sutedjo Sujitno. Each of two books focusing on tin mining history, differs from Teungku’s books that concerns on Islamization. 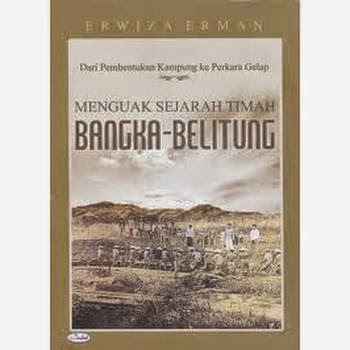 The difference on research focus confirms us to conclude how valuable material and significant factor of Korpus Mapur are. The book may be the early researches in further Islamic study for academics, journalis, or writers in recent years.

Thus, I am really in big ardor talking about the book. Teungku’s works reflected an important point, that we are as community of Bangka do not have quite important resources to figure out our local history.

To indicate our new knowledge, for example, Akek Antak was actually a giant person that live in Bangka for older years ago. He was generally decribed as a powerfull witch. The legends of Akek Antak was familiar among all residents and all region of Bangka for years. But, Deqy assumsed based on the research that, Akek Antak was the early Islamic spreader in the island. One of the facts that convince us that Akek Antak referred as “a white arabian person” in oral tradition of Urang Lum.  later, he believed that Akek Antak's name was
Syekh Abdul Rasheed.

Gaining the conclusion of Akek Antak pushed him to travel around Bangka, Aceh, Palembang, even Hadramaut, and also to drive him studying new majors, for instance, Antropholoy, Fillology, Geography, Liquistic, something new and contrast with his former education background as economic bachelors.

Last, although, we are familiar with oral tradition but we don’t have paper or writens sources for generations. The big question remains, what being a Bangka is and how we introduce us within variety of cultures and social identities among Indonesian culture.

To sum up, I think the Korpus Mapur dalam Islamisasi Bangka, not only become a history book but also become an identity sign for us who live as Bangka resident. It could trigger everyone to retain for other research is my biggest hope.

While looking forward for second chapter, “Philology Intuitive and the Islamic Tomb Inscriptions of Bangka”, I said two thumb up for Teungku Sayyid. May Allah Blesses You. *** (aksansanjaya)